Hello again! Today I’m back from my mini hiatus (hopefully ending soon) to bring you a post featuring a book I read recently and really enjoyed, Defender by G. X. Todd. I’ll be posting a full review as soon as I can because it was the only book that managed to break my reading slump so look out for that in the near future. Anyway, I hope you enjoy this guest post and a huge thanks to the author and the publisher for including me in this blog tour!

This location plays a huge role in book 1, Defender. It’s the end destination for Lacey. It’s the place where her sister and niece live, the last two surviving members of her family. I’m awful with dates so won’t remember the exact year I visited Vicksburg (I’m guessing 2009), but I remember being enchanted with it. I could describe it here, but I do a fairly good job of it in the book, so I’ll tell you a quick story instead.

A friend and I had been travelling around this part of America as part of coach tour. We were the two youngest people on that bus but a good twenty years. After so much travelling, sat on our butts, I ended up with a singular soreness in my tailbone. It became so painful, in fact, I ended up having to buy a travel cushion to pad my butt whenever I was sitting. I suffered through a fair bit of mocking (one fellow passenger even nicked my ass cushion at one point as a joke. Oh, the hilarity). The night we stayed in Vicksburg, I was exhausted, having spent most of the day in pain, and crashed as soon we got into the hotel room with an ice-pack resting on my rear-end. My friend left me and went off investigating. She ended up watching the world’s best sunset over the Mississippi River and all I got was a wet ass from a leaky ice-bag. Despite all that, I love you anyway, Vicksburg. Here’s a picture of me there under a gnarly oak tree.

Emerson Inn by the Sea in Rockport, Massachusetts

I refer to this inn as the Norwood Cove Inn in book 2 of the Voices series, which I believe is the name the Emerson used way back in the day. As with a lot of fiction, I use the Emerson as a template and then take artistic licence from there. I even pick it up and move it south to fit the story’s purposes. Us writers are naughty like that. Rockport is the furthest north I’ve been up the East coast of America. It was 2011 and the very first trip we decided to rent a car and drive ourselves around, and then I promptly got food poisoning on the flight over and was ill for the duration of the holiday. I’m painting a picture that I’m always ill or afflicted with ass injuries, aren’t I? I promise I’m not. Our plan had been to drive up to Maine and see Stephen King’s home. My stomach wouldn’t allow us. Here’s a picture of a decidedly foggy view of the Atlantic from the back porch of the Emerson Inn.

We drove through Estes Park in 2013 on our way to…somewhere. I have an awful memory for location as well as dates, which probably means I shouldn’t have offered to write this blog post. Oh well. We drove through Estes Park and it was beautiful. A huge lake spread out in its valley, and winding canyon roads with sheer wall rock-faces on one side and fast-moving streams on the other on our climb out—I loved that drive. I’d have loved it even more if I’d realised it was the area The Shining was set and where the hotel the Overlook is based on was located. Alas, I didn’t.  I guess it just means I’ll have to go back there again someday. Here is the tree in Estes Park Library which inspired the tree in the Children’s library in Defender. 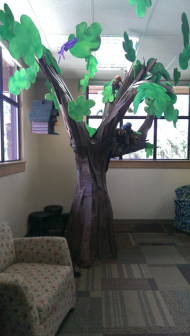 This is one of those places that’s always stuck in my mind. I’m not even sure why, it was just a lonesomely wide and long main road with a Walgreens on. I loved how the Stars and Stripes flag and its flagpole had been randomly jammed into the sidewalk, as if that was a perfectly normal place for it to be. Look out for reference to it in Book 3. Cody was also our gateway into Yellowstone Park, which I think is my favourite place in the whole of the States. 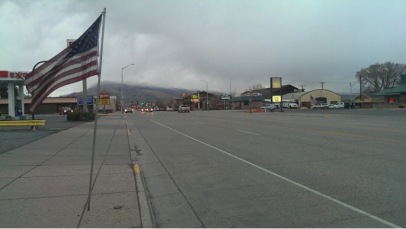 Will I manage to fit Chimney Rock into the series? Yes, I will! It was hidden away in a deep valley surrounded by mountains and trees and we stayed in the best rustic cabin-styled hotel I’ve ever been in. There was something extremely isolating about the place, despite it being a tourist attraction (we visited outside of tourist season so missed all the crowds). I think it was due to the weather. Rain, rolling fog—it wasn’t long before hurricane Joaquin hit the east coast back in September 2015. Chimney Rock is also home to the waterfalls that featured in The Last of the Mohicans. The huge funnel-like rock formation that overlooks the valley is what gives the town its name and it normally affords a stunning view of Lake Lure below (the very lake where that scene from Dirty Dancing was filmed) but when I climbed up the 3,234,523 steps to reach the summit it was swathed in fog. THANKS, HURRICANE JOAQUIN. Here’s a picture of me doing what I do best: pretending to read in a rustic cabin.

One thought on “BLOG TOUR – Defender by G. X. Todd – Five places that will feature in the Voices series”